His voice clung to her garments like the sickening, putrid smell of death and decay upon a corpse. It was insistent, whispering constantly, searing her weak blurry mind with treacherous words and filling her head with heartbreaking statements. She was tired of it and she was tired of him, but she couldn’t make him stop.

She could tell when he came into her room, the sour taste of fear and despair in her mouth and the confusion as her rationality crumbled under his abrasive words. He was in the room at that moment, standing in the corner where her three water pots stood. He was looking at her with eyes that were both concerned and callous, but she wasn’t afraid. She didn’t like that he was there because she was sure he was poisoning the water. Still, she wasn’t afraid.

“I do not feel too good,” she replied him.

“Send for the physician.”

They were words that crawled like ants down her spine. She felt the sadness they brought and the sneer they hid; and she knew the reality existed that he was almost right. She loved life however. She did not want to die.

She turned her head so she could see his face but it was shadowy. She squinted with all the strength left in her but she couldn’t. She had never seen his face. She didn’t now.

“The pungent reek of death is upon you,” he continued his voice low. “Can you smell it? I can.”

“Save your strength and call for the physician,” he said. “Perhaps, there might still be hope left for you.”

“No!” She shook her head. She didn’t want any more myrrh mixed in wine or aloes, or gin berry concoctions, or massages, or poultices. She wanted it all to stop.

The physicians had tried all they knew, and none had come close to halting the flow. She wanted to be strong again, to be able to stand with no support and do things by herself. She wanted to find her family. Thomas had left her. Elizabeth came when she could but Joseph never did. It was hard. She wanted to hold her children in her arms once again, but everyone had run away.

“You are tired. You need a physician,” he replied.

She closed her eyes and drew in a deep breath. It was filled with the unpleasant scent of misery and pain and old blood. The smell lived with her daily, the rusty, rancid odor of spilled blood going bad. It hung like a heavy cloud in the air and invaded every space in the room. Sometimes it was more, sometimes it was less, but the smell never went away.

“I need some water,” she said and lifted herself from her pallet. Fighting over whelming exhaustion, she placed her hands on the carpeted floor of her room and swung herself unto her knees. The warm rush of lukewarm blood between her legs teased her senses and the room shifted. The walls looked like they were slanting and the ground fell beneath her. She gasped.

She placed her hands on the floor and crawled towards the water pots, towards the dark grey robes that hid his feet. Each movement was arduous but the prospect of water sliding down her throat gave her strength.

“You cannot continue like this,” he said. “Your condition is worsening.”

She ignored him and crawled close enough to stay on her knees and reach for the drawing vessel. The water was cool and refreshing. She felt a little stronger, a little less light headed. ‘Perhaps he hadn’t poisoned it.’ She thought.

“The last physician was right. Your illness defies medicine. You will not make it past this year. You will die soon.”

“They will only take your money and sell you lies. There is nothing more to be done for you.”

She clutched the edge of a water pot and glared up at him. “I will not give up.” She repeated.

He stared at her for a long length of time. She tried to see his face but her eyes were too dim, she couldn’t. Then he spoke. “You are thinking about the Rabbi. The one they say works miracles. You are thinking you can go to him and get a healing.”

“Abigail said he healed her son. Abigail would never lie to me.”

“Abigail, whose son you have never seen,” he said.

She stopped to consider this for a moment. She had truly never seen the boy, never known when he took ill, nor ever known when the miraculous healing occurred.

“You have been this way for twelve years. You stepped out of this room last seven years ago. Abigail claimed he healed her three year old son whom you have never seen.”

She clutched to the pot’s edge and almost swooned as a wave of nausea washed over her. She reached for some more water and stopped herself. ‘Perhaps it’s poisoned!’ She thought to herself. She shook her head. ‘Abigail would never lie. She would never lie to me.’

“She has filled your head with ridiculous stories. Blind men seeing, lame men walking, five loaves of bread becoming enough for four thousand people, those things are just what they are, stories. They never happened.”

She shook her head. “I have to try.” She whispered.

“You would believe anything?”

“I would believe something.” She stared towards her door way at the hint of light trickling in through the tiny crack. It beckoned to her with hope. “I would rather hope, than die.”

“There are no such things as miracles. You hoped before, and it brought you nothing but despair.”

She felt the usual trickle of blood between her legs and then a large lump with more blood. With it she felt her strength ebbing away. ‘Nothing but despair! That was true.’

“You have believed before and you have seen the result,” he continued. “Pain, more pain, lies, and more lies. You have trusted the physicians and they have let you down. Why should you continue to hope?”

“Because it gives me a reason to keep living,’ she said more to herself than to him.

Then she heard it, the cries that rent the air, the sound of many feet, the shouting, running and the chant of many happy voices. The excitement had caught the air like a runaway wildfire. She knew immediately that the Rabbi was passing by again.

“He is here,” she took in deep breaths filled with the fishy smell of the infirmity that was slowly killing her. “He is passing by. Don’t you see that this is my chance?”

“You would go to a mirage?”

“You want to go out into the street?”

“You cannot even make it to your own front door. Save your strength.”

“Why won’t you help me?” She cried reaching out for him. “Help me up. Take me out into the street.” Her hands grabbed the pot’s edge again as she almost fell.

He held himself away from her and peered down with disdain. “You will be trampled by the crowd in the street. It is better you stay here and wait for Elizabeth to come.”

“He would be gone by then. Please help me,” she whispered.

“He is a liar.” His voice rose, and with it the despair that clouded her judgment. “They say he works the miracles by the devil’s own hand and that he is not to be trusted. No man can do the things they claim he did. No man can ever come back from the dead. No leper can ever become clean. No one can take ordinary water and turn it into wine. No one can straighten a shriveled hand, it is impossible.” His voice rose with each statement and tore at her confidence. His voice rose till it became a shrill ringing sound in her ear.

She knelt by the pots and fought to keep his words out of her mind. She knew he was right. She was too tired to get to the door, she had tried many times.

“You should get back into your bed and stay there.”

She turned to stare at her bed. It was low, and comfortable and soft. It was familiar, a place of rest from pain and from the weakness that plagued her. But it was also stained, marked by the dark red blood of her infirmity and certain death.

‘They say he works miracles.’ She thought. ‘…even if by the devil’s hands.’

“I am going outside,” she announced. “I will die in that bed anyway.”

“You are a fool, a fool marked for death. There is nothing for you outside but death.”

Inch by inch, she crawled her way through the sting of his barbed words towards the light. She crawled, beckoned by hope and blind faith. She refused to listen to the voice of reason, the voice that seemed true. She believed she would receive something and was determined to die trying. 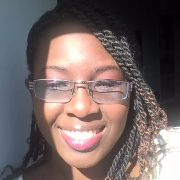